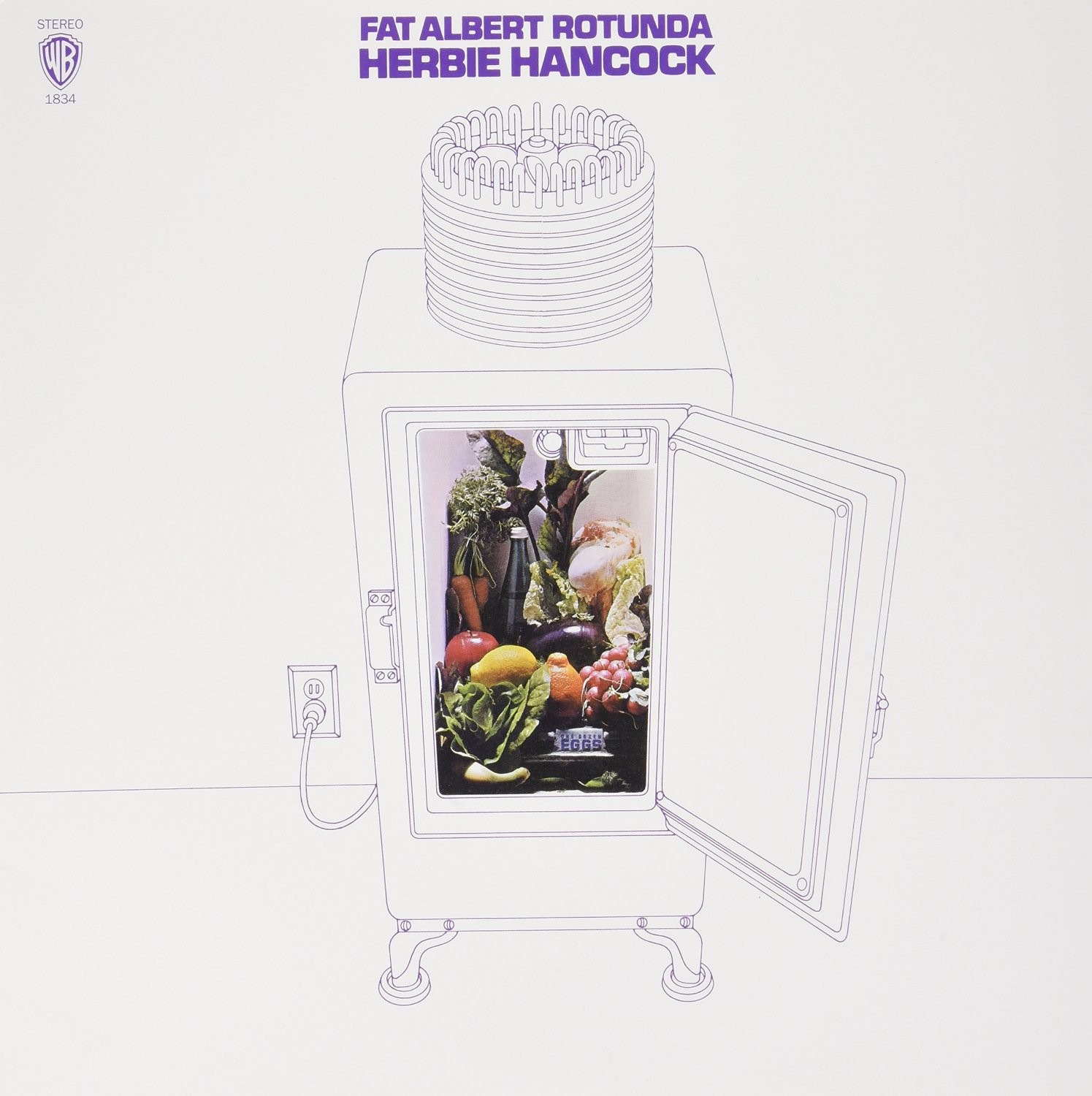 “Centered around some soundtrack music that Herbie Hancock wrote for Bill Cosby’s Fat Albert cartoon show, Fat Albert Rotunda was Hancock’s first full-fledged venture into jazz-funk — and his last until Head Hunters — making it a prophetic release. At the same time, it was far different in sound from his later funk ventures, concentrating on a romping, late-’60s-vintage R&B-oriented sound. with frequent horn riffs and great rhythmic comping and complex solos from Hancock’s Fender Rhodes electric piano.

The syllables of the titles alone — “Wiggle Waggle,” “Fat Mama,” “Oh! Oh! Here He Comes” — have a rhythm and feeling that tell you exactly how this music saunters and swaggers along — just like the jolly cartoon character. But there is more to this record than fatback funk. There is the haunting, harmonically sophisticated “Tell Me a Bedtime Story” (which ought to become a jazz standard), and the similarly relaxed “Jessica.”

It was that sort of evening, it had been like that all day,
The air hung low and musty, smoke sweaty from unlit cigar,
Through pulsating arteries, through pumping throes of peace.
In marched the carnival and men and reds and blues and pinks and greens and dirty yellow and trumpets
blasting, horses laughing, clowns prancing, people steaming.
Streets a-crowded.

Empty spaces at dawn find constancy in the dew,
Before the day explodes in measured pores and glands blast,
Witnessed by a single soul, bleak yet sure enough,
Coming down the hill, it is the long distance runner.
What he knows he sees, and readily, and regularly contrives
To visit burning orchards, for the scent of heady hives.
He’s run that far and further too, to the end of the town,
And even outside, so some say, but ne’er admit to his ascent.

Past field and furrows and forests, through underground terrain,
To a religious place of his, to a glen that needs no name,
For in it grows the grass – a green blade from dark
Dank days it moist and barely breathes, it chokes earth to sun aloft, on rich extreme,
It suffers pressures gladly, bears itself upright,
Through irregular wafts of wind, tickle this nature’s stem and tease
Brown soil, a regular chorus of ageless elements,
Steady breezes of light, relaxed crusty rain
Insinuate the happy monotone, now

And on and on and on he goes, pulsing purring limbs,
Moving meticulously, gaining strength from each refrain
Through and to the carnival, a tired face of former days,
Smiling to please itself, to bring color to the wrinkles, of
Living moving, body-cells, with blood pumping, whores a-hungering and
People feeling you, even a cloud has no place to hide, but runs
Along, a heady prize, the stretwalks resound, they echo sound to
Repeat the beat of fleet runnings

A beat to rejuvenate ghostly hearts:
To meet the pace of song,
To rein fuse the sliding morass of ending slime,
To invigorate missionaries,
To redden the clown’s embraces,
To gladden the blade of grass’s hour,
To rest weary horsebeats
To burnish varnished pride.
To bite the sensual quick,
To awake the sleepy breast,
To repeat the needy message
For people self-oppressed.

And so the runner runs and runs,
Step, on step, on step,
Paced by self-exertion,
Prompted by self-esteem
He turns and sees the blade the street
The carnival the clown,
He sees rhythm refreshing places,
And the rebirth of a burning town.

He turns to run and pulse again, when he half stops to pause.
His face crumbles and cracks wide open
And emits

“When I told Miles Davis’s manager that I wanted to form my own group,” Herbie Hancock explained to a full house at Boston’s Jazz Workshop in 1972, “he asked me, Who do you plan to have in your trio?’ When I told him that planned to lead a sextet, he told me it was impossible for a group of that size to survive. Well, I kept a sextet together for three years until last week, when we added a seventh member!”

Hancock was speaking with justifiable pride, given the parlous state in which most working jazz artists found themselves in the early 70s. He had not only kept his band together, but sustained a constant personnel for two of those three years, taking advantage of the familiarity bred by nightly playing to build a collective knowledge that informed every set. It would not last forever. By 1974, Hancock had reduced and reconfigured his instrumentation, adopted a funkier rhythmic slant and achieved pop-chart success. His sextet period was no mere transition phase, however; it resulted in some memorable and influential music, most of which was documented during Hancock’s affiliation with Warner Bros.

If anyone was likely to beat the odds on leading a band in that rock-fixated era, it was Herbert Jeffrey Hancock, who had already shown an incredible knack for joining visionary impulses with commercial acceptance for nearly a decade. His first recording as a leader in 1962 had produced the blockbuster “Watermelon Man,” his 1965 masterpiece Maiden Voyage began life as music for a cologne commercial on television, and he had displayed singular range and flexibility with his score for Michelangelo Antonioni’s epochal film Blow-Up. Then there was the nearly six years Hancock spent in the Miles Davis Quintet, one of the seminal ensembles of that or any jazz period. Hancock was aboard when the trumpeter first added electric instruments, and would reconnect with Davis for influential recording sessions during the years that the music in the present collection was created.

So Hancock had one of jazz’s more diverse palettes at his disposal when he formed his band-including a thorough knowledge of bebop, modal and free jazz, a pioneer’s interest in the electric, rock-inflected style that had not yet been dubbed fusion, and experience writing for other media that prepared him for all manner of compositional sound-painting. He also knew what kind of ensemble would offer the greatest possibilities, which is why he insisted on a sextet where the smart money would have told him to economize.

The particular three-horn blend that Hancock favored can be traced back to his 1968 Blue Note album Speak Like A Child, where flugelhorn, bass trombone and alto flute were orchestrated in an expansive manner that revealed the influence of Miles Davis’s old friend and collaborator Gil Evans. The same options were available in Hancock’s first sextet, which is heard on the late 1969 sessions that produced the album Fat Albert Rotunda. The band had recorded The Prisoner for Blue Note earlier in the year which is closer to the searching impressionism of Speak Like A Child. Fat Albert Rotunda, in contrast, reflects the funkier electric avenues that link “Watermelon Man” to his contemporary efforts with Davis.

“I did the music for the Fat Albert cartoon show Bill Cosby did on TV,” Hancock explained in a 1971 interview. “Bill had the soundtrack tape, which he played for the executives at Warner Bros., and they flipped over it; they just loved it. So I chose to record Fat Albert Rotunda as my first album for the label-which gave me the freedom to do Mwandishi next.”

The album, which is Hancock’s most commercial venture to date, was built around the original Hancock sextet that included Johnny Coles (trumpet, flugelhorn), Garnett Brown (trombone), Joe Henderson (tenor sax, alto flute), Buster Williams (bass, electric bass) and Albert “Tootie” Heath (drums), with studio reinforcements added. Given the functional nature of the music, the emphasis on funk rhythms is not surprising and sounds less dated a quarter-century later than the primitive electric piano that Hancock employs. Creating music around Cosby’s popular characters provided an effective opportunity to write popular music with some challenging wrinkles. For the most part, Hancock succeeded surprisingly well.

After its mysterious introduction, with what sounds like a banjo/sitar hybrid and muted trumpet, “Wiggle-Waggle” becomes a funky celebration with clever rhythmic displacements and voicings passed among the brass and reeds. As responsive parts begin to accumulate, Joe Henderson launches a frisky, emotions-on-sleeve tenor solo as the ensemble shouts support. A typically open Hancock voicing, far removed from standard funk of this type, introduces a trumpet solo played by Count Basie alumni Joe Newman, who was in the trumpet section rather than the more introspective Coles. Newman’s shakes and the more complex backgrounds set up Hancock, who leaves a calling card of sorts with his opening solo break. His mix of riffing, counter-rhythmic tension, melodic flow and exclamatory trills feeds off the full band as it repeats the infectious theme to the fade.

The groove is heavier on the next track, befitting a “Fat Mama.” The simple melodic material is embellished by evolving call-and-response figures from the horns that inspire Hancock’s piano inventions as surely as the lumbering swing of the rhythm section.

“Tell Me A Bedtime Story” is the best-known composition from this session, and one of his most tender ballad creations. After a haunting trumpet introduction, the sextet states the theme (Henderson on alto flute), reinforced by the full ensemble on the reprise. The harmonic and rhythmic suspensions on the bridge, plus the quirky resolution of the main melody, add great character to an already memorable line. Hancock takes a gentle half-chorus before the theme returns and sets up a double recapitulation and quiet, tumbling coda.

Grand piano brings on “Jessica.” Garnett Brown’s trombone states the theme first, with Henderson’s alto flute trailing countermelodies. Then Johnny Coles takes over for a heartfelt flugelhorn lead as the ensemble spreads under his improvisation. Hancock follows with his only acoustic solo in this collection, offering another, more intimate opportunity to appreciate the supportive work of Williams and Albert Heath.

“Fat Albert Rotunda” begins with a fanfare, which brings on the infectious theme. The two-note figure that underpins the performance is the focus of Hancock’s opening electric piano solo, which is spurred by an added (and unidentified) electric guitar. Henderson explodes into his tenor solo (the man has always known how to get started) and continues to wrestle demons as the signature vamp adds intensity underneath. The theme returns, with horn punctuations, before Hancock leads the fade out.

The more excitable “Lil’ Brother” ends Hancock’s first Warner Bros. project with some added starters featured. Bernard “Pretty” Purdie is in the drum chair. The theme (scored for trombone and alto flute in unison) gives way to what becomes a recurring guitar break by the late Eric Gale and the hortatory tenor solo is played by Joe Farrell. After Hancock’s solo, the theme leads to a coda that allows some of the gentler images from Fat Albert Rotunda to momentarily reappear.” – Bob Blumenthal, 1994