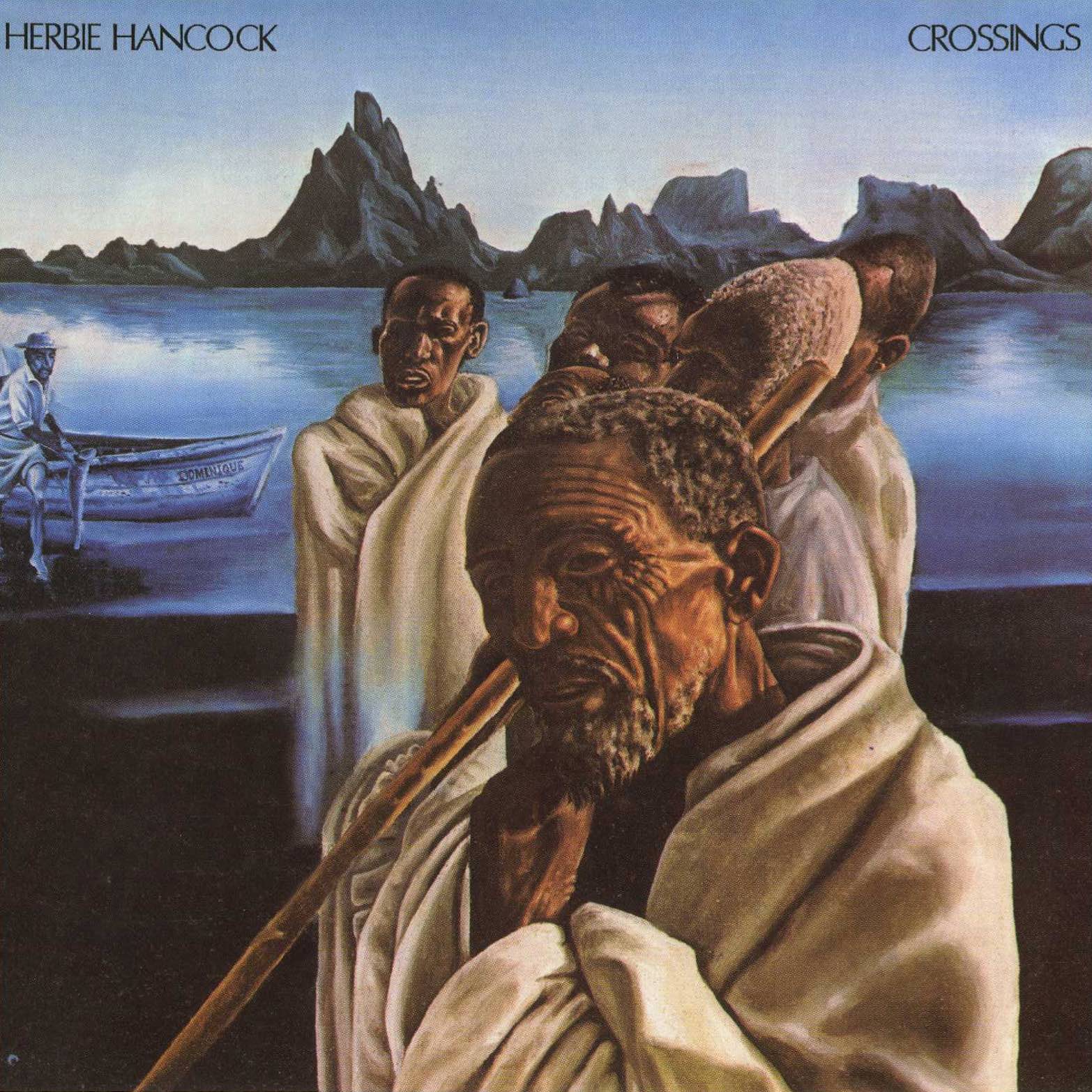 “By 1972, popular music had once again been swept by change. As the optimism of the Sixties faded, black music reflecting the changing dynamics of America’s inner cities began to dominate the scene. In 1971, Sly & The Family Stone’s There’s A Riot Going On broke through, while Marvin Gaye’s album What’s Going On produced a huge hit single of the same name. A year later, Stevie Wonder’s coming of age put Music of My Mind and Talking Book into the lists of million sellers, with “Living for the City” from 1973’s Innervisions chiming with the realities of black urban life.

Times were changing, and when Herbie Hancock came to record a follow-up to his critically acclaimed, but poorly selling, Mwandishi from 1971, he, like most other jazz musicians at the time, were trying to make sense of the ever changing music climate around him. “Stevie’s latest album is really another kind of freedom,” he said of Innervisions, “He uses the synthesiser, or lots of synthesisers and uses a lot of techniques for doing the music he does. Marvin Gaye’s album What’s Going On seems to be a departure from what you might expect from the Motown sound. Marvin Gaye takes the freedom of letting conversation go on while he sings on top. It’s as though he’s using the conversation so he can sing ‘What’s going on?'”

Freedom? Synthesisers? Both would have resonance in his 1972 album Crossings, the beginning of a new direction in Hancock’s music. After leaving Miles Davis in 1969, he had formed his own sextet, a group that he managed to keep together at a time when jazz had all but been swept aside by the sudden and unexpected rise of rock music of the Sixties. Overnight, he had seen jazz clubs either closing their doors or changing themselves into things called Discotheques while more and more American jazz artists sought security of work in Europe. Those who remained at home were forced to reassess their artistic direction along the lines of socio-economic reality.

Duke Ellington and Count Basie recorded albums by The Beatles, Ella Fitzgerald began featuring songs by the Carpenters and Del Shannon, the Modern Jazz Quartet signed with The Beatles management company Apple and ‘New Thing’ saxophonist Albert Ayler made extensive use of rock rhythms and soul singers on New Grass. Hancock’s manager and record producer was David Rubinson, who was suggested to him because Fat Albert Rotunda, Hancock’s debut album with Warner Bros. from 1970 failed to sell as well as predicted. “[Poor] sales are not good enough for them,” said Hancock, “and they thought that maybe if they got me a record producer that had a broad enough taste and broad enough understanding of music to be able to relate to what I am doing, maybe I could relate to him. They thought [Rubinson] maybe could pull me over to doing some more commercial stuff.”

Viewed in that light, Mwandishi that followed in 1971 (also now released on CD) was surprisingly anything but commercial. At the time, Hancock was influenced by the music of Sun Ra. “What happened was David Rubinson heard my sextet, and we were playing very avant garde music that completely captured him,” recalled Hancock. “And then he became a champion of our cause instead of the record company’s cause. But at the same time he really wanted to stand up for what we were doing because he thought it was valuable, but he’s thinking, ‘How can we make this music as palatable as it can be without changing the music?'”

In February 1972, Hancock and his group entered Pacific Recording Studios in San Mateo, California to make Crossings. Rubinson suggested that Pat Gleeson come in and set up his Moog synthesiser for Hancock to play. “Electronics was associated with rock n’ roll at the time. The synthesisers, just the sound of the stuff,” said Hancock. “And so we felt like if we could do anything that could link us somehow to a wider audience, as weird as the music was, it could possibly help sales.” Although sceptical at first, Hancock was quite taken by the synthesiser and asked Gleason not only to do the overdubs on his album but join the group, making it one of the first groups to take a synthesiser out on the road.

On the strength of the new ‘electronic’ sounds, the band was booked into rock venues such as Fillmore, Fillmore East, the Winterlands and San Francisco’s Both/And. The spiritual/sensual ‘space’ grooves of his Crossings music and the spiral of rhythms swirling within created music that not only was of its time but has outlived them, music that is of a piece. “Sometimes you can take someone who knows nothing of the kind of music you’re doing,” Hancock once reflected, “Their hearing can sometimes be so pure that it can go right to the heart, and they can really love it without having any intellectual understanding of it. And that kind of music, even though intellect went into playing it, the purpose was really non-intellectual. It was purely emotional.” – Stuart Nicholson, 2001 Remastered Edition Liner Notes

Herbie Hancock: “The new avant-garde has finally found a direction, but it’s like a spectrum. It’s not one direction; there are many directions and they all have to do with giving people an experience rather than just giving them a bunch of notes.”

The experiential approach was carried further on the 1972 recording Crossings, which introduced the group’s seventh member, Patrick Gleason on Moog synthesizer, plus conga drummer Victor Pontoja and a five-voice chorus.

“Sleeping Giant,” a particularly ambitious Hancock composition, touches on several moods and textures as well as the added players and the expanded arsenals of the sextet regulars. Everyone except Gleason is playing percussion on the opening, which carries a strong African flavor that reinforced the album’s striking Robert Springett cover painting.

Hancock and Williams toy with the meter before establishing a forceful 6/8 that the pair ride into a magnificent extended improvisation. As in “Ostinato,” the steady pattern frees Hancock for some striking rhythmic superimpositions, while also allowing a heady momentum to build. Hancock sounds a phrase to signal a change in mood, and the horns return with slowly congealing parts that make effective use of muted trumpet against a deep trombone bottom.

Williams emerges with an odd, halting pattern on electric bass that supports Priester’s echo-laden meditations as Hancock and Hart grow more active, finally taking the music into a funky 13-beat vamp for the rhythm section. The quieter theme reappears just as suddenly, then gives way to a steadier, more symmetrical passage where Hancock again blows over charged backing from Williams and the others. His percussive approach prevails until he sounds the cue riff once again to bring the horns back for more thematic musings.

Now Maupin takes over, with Williams and occasional percussion in support, until the other horns and the funk tempo returns. Linear development and pure sound are both used effectively in Maupin’s soprano sax solo, with sympathetic comping from Hancock that helps build the tension. Then the other horns are cued back in and the music seems headed for a peaceful conclusion; but the giant, far from exhausted, gives one final kick before the band closes with a passage where sound turns to pure air.

Chords from an acoustic piano trigger “Quasar,” the first of two Maupin compositions that complete the Crossings session. Built around a simple unison theme and a 7/4 time signature, the piece takes on a fluid, other-worldly coloration with Gleason’s synthesizer washes and the composer’s peripatetic alto flute. Henderson follows with one of his active, probing episodes as a cowbell reinforces the beat. The ending is effectively ominous-lost sounds in uncharted space.

Maupin’s other contribution, “Water Torture,” makes even greater use of Gleason’s presence. It begins with strange sonic drips and disembodied voices, the drum and percussion parts offering the anchors of stability in this strange new world until electric piano and bass clarinet state the slinking theme that could pass for one of Hancock’s own. What follows is not so much a solo as a collective impressionist sound-painting, with everyone applying dabs of color to the constantly reconfigured canvas. The melody reappears to signal new rounds of invention, with Henderson often hovering at the top of the sound mass and Gleason supplying ever more impetuous colors.

Hancock sustained this approach briefly after signing with Columbia in 1973 and recording Sextant – but not for long. “One thing became apparent to me last year,” he explained in a 1974 interview that explained the change in perspective that led to his ultra-funky and enormously successful Head Hunters album. “I’d go to friends’ homes and see my albums on the shelves with lots of other people’s records, and they’d play all the others except mine. My intention at the time was to play music to be listened to with undivided attention; but how many people have the time to approach music that way? Before, I was so interested in spirituality that I didn’t recognize that a person puts on a record with his hands and not his spirit.” So the emphasis shifted from “heavy musical trips that try to expand people’s minds” to “making people feel like getting up in the morning and going to work.”

“I’m not knocking the other thing,” Hancock insisted, “I’m just saying that there are several ways to look at music.”

He has persisted, in the decades that followed, to continue looking at music from various perspectives. Many of which have roots in either the funk or the freedom of his Warner Brothers years. – Bob Blumenthal, 1994