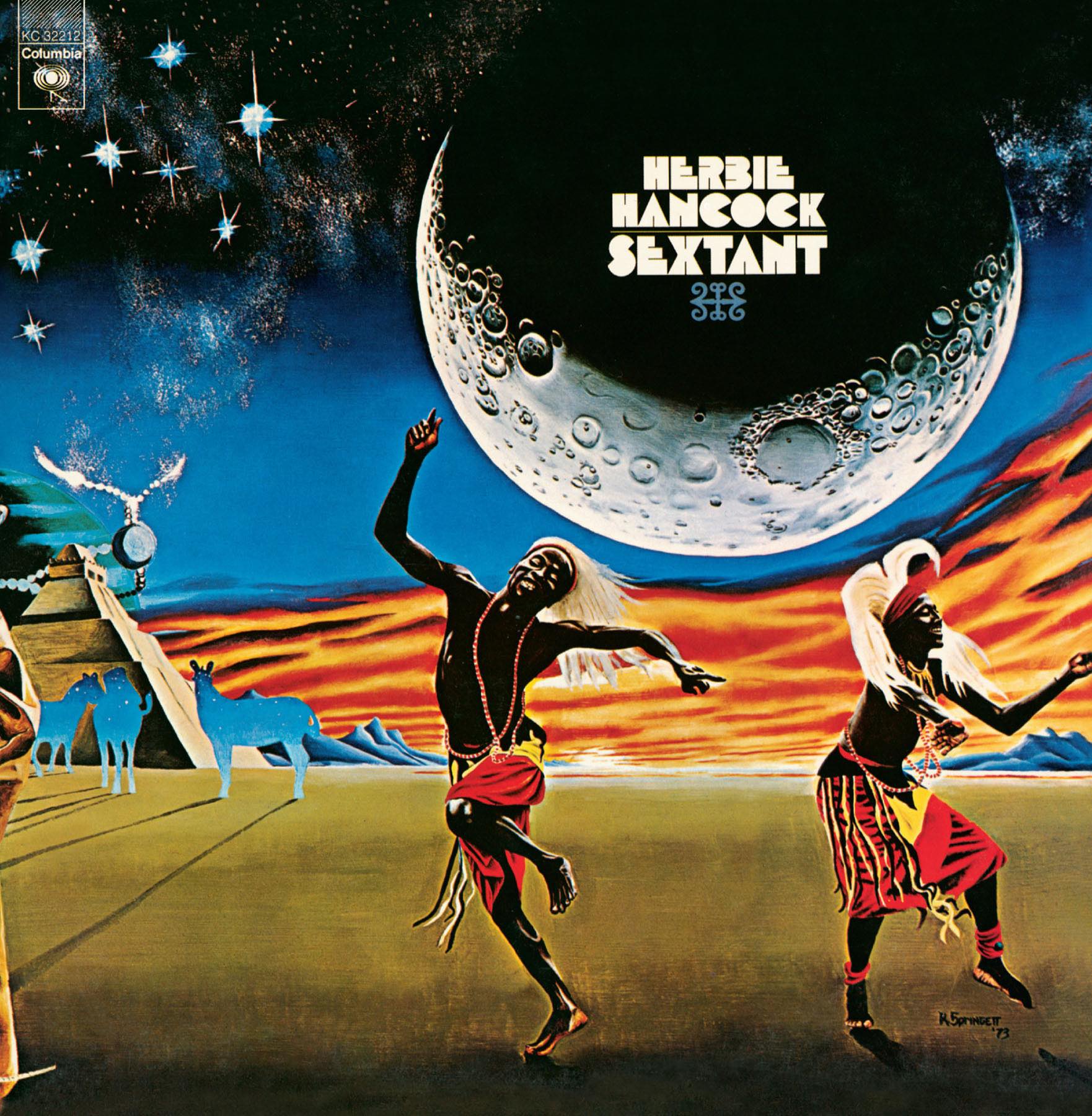 “The recording of Sextant not only marked the starting point of Hancock’s relationship with Columbia, but coincided with a new beginning in his private life as well. After living in New York City for 11 years, Hancock moved to Los Angeles with his wife Gudrun ‘Gigi’ Meixner and their young daughter Jessica in December 1972. Another profound change earlier the same year was his conversion to Nichiren Shoshu Buddhism, reflected in the distinctive spirituality heard on the albums of The Mwandishi Band (so-called because of the Swahili names taken by the musicians).

Armed with an electronic arsenal of sound effects and a synthesizer, as well as indigenous African percussion instruments, the septet’s extended collective improvisations produced an absorbing mixture of ethereal, yet earthy sounds, ranging from the eerie synthesized ambience of “Rain Dance” to the funky, percolating 19/4 groove of “Hidden Shadows.” But faced with a record company which lacked the marketing and promotion links with the black music market, and due to the heavy financial burden of constant touring with the large ensemble, Hancock eventually disbanded the group shortly after the album’s release and ventured into something different…Head Hunters.” – 2013 Sony Box Set Liner Notes

Herbie Hancock left the Miles Davis Quintet in the summer of 1968. He had recently married, and was to embark on his honeymoon in Brazil, and decided to extend his stay. Miles booked some gigs (Miles worked when he wanted to), Herbie was unavailable, Chick Corea was, and lo and behold, Herbie was gigless.

Herbie may not have returned from his honeymoon with a steady gig, but he had opportunities waiting for him that few of his generation could enjoy. Herbie had been involved with movie soundtracks (Blow Up), television Commercials (Yardley Perfume’s use of “Maiden Voyage” and a cigarette brand theme that eventually became “Promise Of The Sun” or “I Have A Dream”), recording sessions with Sonny Rollins, Donald Byrd, Eric Dolphy, Jimmy Heath, Kenny Burrell, Stan Getz, Benny Goodman, Wes Montgomery, Phil Woods, Harold Vick, George Benson, Stanley Turrentine, Jackie McLean and many important Blue Note sessions of Wayne Shorter, Lee Morgan and Bobby Hutcherson. Since May of 1963, Herbie had been a key member of the Miles Davis Quintet. He was on (as of 1968) ten Miles Davis Quintet albums, and had recorded seven sessions for Blue Note, six of which had been released by 1968.

Herbie had worked on occasion as a leader of a trio. When Miles was hospitalized, Herbie played the Village Vanguard with Richard Davis and Tony Williams during the Summer of 1965. So when the time was right to put together a trio, his first choice was Ron Carter on bass and Mickey Roker on drums. Herbie did some gigs with Ron and Albert Heath (Jimmy Garrison did a week with the trio in Philadelphia) but he needed to expand and develop his compositional ideas that were based on the music from Speak Like A Child (Blue Note). By 1969, Buster Williams became the full-time bassist (Albert Heath was still the drummer). Herbie then added three horns to his trio; Johnny Coles on trumpet, Garnett Brown on trombone, and Joe Henderson on flute and tenor sax. This sextet formed the core group of two 1969 recording sessions: The Prisoner for Blue Note and the soundtrack to Bill Cosby’s TV show Fat Albert Rotunda.

The Fat Albert Rotunda Soundtrack signaled Herbie’s move from Blue Note to Warner Brothers, a large, pop-oriented label. Instead of watering down his approach to fit the “anticipations” of a large, art-lite label, Herbie’s next two recordings charted fresh, new ground. Perhaps it was Herbie’s participation in two November, 1969 sessions with Miles Davis (that turned out Orange Lady and Great Expectations), and the amazing success of Miles’ Bitches Brew recording that challenged Herbie into taking a risk by pushing his sound a little further out.

The first real Herbie Hancock group was the Mwandishi band, so named for their second Warner Brothers release. The group was Eddie Henderson on trumpet and flugelhorn, Julian Priester on alto trombone and trombone, Bennie Maupin on flute, Saxello and tenor sax, Herbie Hancock on piano and electric piano, Buster Williams on bass and electric bass and Billy Hart on drums. The musicians played percussion instruments and adopted Swahili names. Mwandishi was well received by critics and jazz fans, but the band was not as successful as a concert attraction. The music was intense, abstract and dramatic, great to listen to at home on the stereo (the recording quality was state-of-the-art), but hard to concentrate on in a live setting.

Mwandishi (1971) and Crossings (1972) (with Patrick Gleeson now added to the group as Synthesist) were great recordings, but Warners had a hard time selling the music. The crossover era was in a decline; it seemed that everyone was making fusion music. The group’s 1971 tour of Europe was legendary in that the band never slept, and were forced to travel unheard-of distances just to make a gig. The Mwandishi band was working in Detroit in January of 1973 for $160 per week. They travelled together in a van, with members of the group setting up the PA system (carried on the van), drums, amplifiers, and Herbie’s keyboard rig (which now included an ARP synthesizer) for each gig, and then tearing the setup down at the end of the night and moving on to the next town. The day-to-day was a struggle.

Herbie moved to Columbia Records in mid-1973, and recorded Sextant, which turned out to be his last album with the Mwandishi band (although the band continued to record “ad hoc” for others into 1974). This recording (and subsequent tour) became a major turning point in Herbie’s career. Low sales of Sextant, the financial drain of the Septet, and a fateful gig opposite the Pointer Sisters caused Herbie to re-think his musical goals. He disbanded the Mwandishi group and moved to Los Angeles. He (and Bennie Maupin) teamed up with Harvey Mason, Paul Jackson and Bill Summers to create what would become the Head Hunters album. By the spring of 1974, the radio single “Chameleon” became a hit and launched Herbie into a new world.

It has taken nearly thirty years for the world to catch up to the vision that Herbie and the Mwandishi band achieved. Young remixers and ambient composers have begged, borrowed and stolen little bits of this band, and much of it from Sextant. Sextant could define “ambient,” but it has an extra-musical element that serves to separate the music from the trend.

“Rain Dance” starts off with a loop-like, sequenced groove (in today’s language) that Eddie Henderson plays briefly over until an edit announces the formal part of the song that swirls around Buster Williams’ bass. Herbie begins his Fender Rhodes solo until the section dissolves into Buster’s probing bass solo interlude over the sequenced groove. Herbie jams with the sequencer pattern using a ring modulated Rhodes piano while Patrick Gleeson solos on the ARP synthesizer (effecting this with amplitude, frequency and ring modulation). This is “trance jazz” at its best.

“Hidden Shadows” (basically in A minor, with an open structure) begins in 1974, with the bass and bass clarinet declaring the bottom groove. Herbie and Patrick Gleeson create synthetic, other-worldly sounds. After about three minutes, the horns state the melody; fanfare-like figures that blare in and out of the synthetic matrix. Eddie Henderson solos first, his trumpet drenched in reverb and regenerated back into itself. Julian Priester enters (via an edit) and uses the echoplex and reverb as improvisational tools. The horns bring the melody back before Herbie switches to acoustic piano for an energetic solo that ends up mixed into the production (with reverb) before the melody appears again (for the last time), and the band takes the groove back down to finish as quietly as they began.

In June of 1972, Herbie, Bennie Maupin and Bill Hart were involved with what would become the Miles Davis On The Corner album. Miles Was trying to “get to the young kids,” but the music released was very “avant,” and Miles’ dream was unfulfilled. The music recorded during those sessions must have had some influence on the Mwandishi band. “Hornets” is hardcore groove, with a great, burning Eddie Henderson solo. Herbie’s clavinet funks along until the horns bring some excitement to the proceedings with fanfare, and “out of time” entrance, launching Eddie into an even heavier solo.

An interlude announces Bennie Maupin’s bass clarinet solo, which ends up in a screaming section over mad synths (Herbie and Patrick). Eddie and Julian play a chant-like theme to end Bennie’s solo and Julian begins his solo (using echo and reverb effects) against something that sounds like a duck (Bennie’s mouthpiece). The horns enter at about the eleven minute mark with another transition phrase, which sends Herbie (on a ring modulated Rhodes and clavinet) and Buster (on a Wah-Wahed electric bass) into nirvana.

Herbie switches between Rhodes and Clavinet and adds effects at will to create an alien solo that the group is only too happy to contribute to. The rhythm section settles into the original groove as Herbie ends his modulated solo (the “duck” comes back) in a frenzy with Patrick Gleeson. A cue at 17:39 sends the group into a ‘Coda’ section, with Herbie (on Clavinet) and Patrick’s synth resetting the groove. – Bob Belden, May 1998

Note: on the original tapes boxes for this album “Rain Dance” was called “Loop Tune” and “Hidden Shadows” was called “Million Seller.”

ARP 2600 – This analog, monophonic, patch-cable synthesizer was first released in the early 1970s and had the look of an old telephone patch board. This instrument was used on “Rain Dance”.

ARP Keyboard Model 3604 – Just as you would use your keyboard to operate your home computer, the ARP keyboard serves as the controller for the ARP 2600.

Fender Rhodes Electric Piano – This electro-mechanical piano uses a hammer striking a tuning fork to create its unique sound. Fender released several models of the Rhodes piano, which ranged from having 61-73 keys. This instrument was played by Herbie on Sextant.

Hohner D6 Clavinet – Released in the 1970s, this amplified clavichord produced its sound using hammer striking strings. The clavichord is a stringed keyboard instrument used as early in history as the Middle Ages. Herbie played this instrument on Sextant.

Maestro Echoplex – A tape delay effect first released in the early 1960s. This device allows a guitar or keyboard player to record themselves and play back that recording in real time, and then play another line on top of the recorded line. This allows one player to create layers of music and ideas. Herbie used this device on Sextant.

Mellotron – This electro-mechanical polyphonic keyboard, released in the 1960s, is in a class all its own. This instrument uses the technology of a sampler and a piano and looks like an organ. A key pressed causes this instrument to read a piece of magnetic audio tape and play back a preset sample lasting eight seconds. Herbie plays this instrument on “Hidden Shadows”.