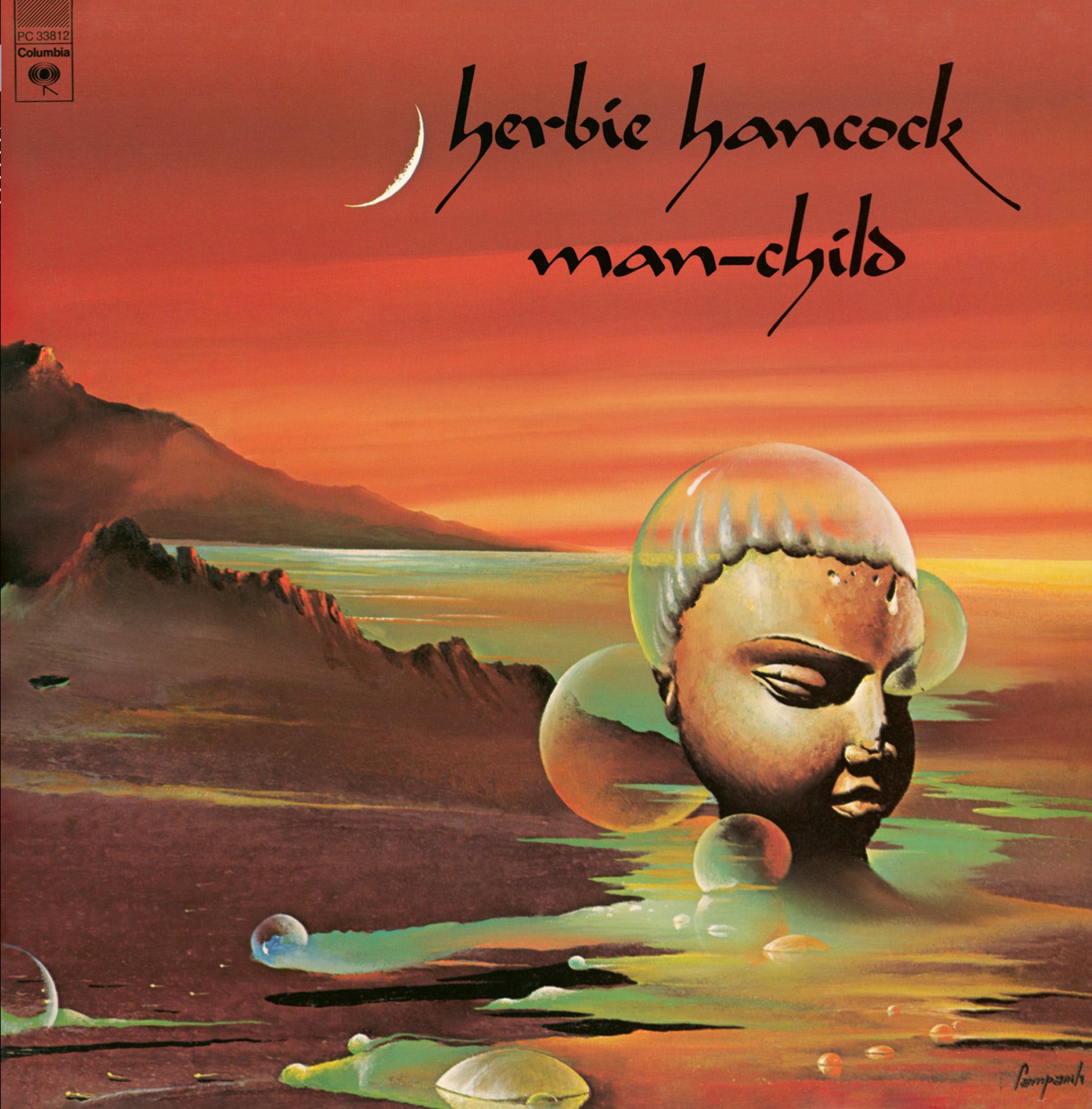 “While Blackbird McKnight took on the guitar duties in the live band in 1975, Wah Wah Watson became Hancock’s primary studio collaborator and played a pivotal role in the making of Man-Child. Besides bringing in his instantly recognizable sound, he also co-wrote four of the six tracks and led the music in a different direction from the previous albums with The Head Hunters Band. From the smoldering, funky opener “Hang Up Your Hang Ups” to the mellow, subtly orchestrated “Sun Touch,” Man-Child exudes a more polished and produced sound than its predecessors, not least since Hancock expanded the studio personnel to include a horn section, a string of renowned session musicians, as well as two stars and good friends of his – Wayne Shorter and Stevie Wonder. The live band introduced a few changes into the new material which they promoted on a tour from September to mid-November 1975. On “Bubbles,” Hancock used a drum machine on the stage for the first time. Paul Jackson, who had also played Hammond organ a lot back in the Oakland days, provided “Steppin’ In It” with the fat synth bass line dominating the album version. And Hancock availed himself of a talkbox for his first vocal experiments. ” – 2013 Sony Box Set Liner Notes

“From 1977 until 1981, the sound of most of the Hancock recordings was dominated by synthesizers. Polyphonic instruments were being designed and manufactured at an alarming rate until musicians were overwhelmed by the choices. Herbie found that some synthesizers had unique tonal qualities, and polyphonality, such as the Prophet models and Yamaha CS-80. In this period, Herbie’s and sound technician Bryan Bell’s programming yielded soundscapes that recalled “real” acoustic instruments – but synthesized, created, and controlled by Herbie alone. Bennie Maupin developed skills on the Lyricon, a wind synthesizer, first used in touches on Man-Child. The instrument became an integral part of the sound of the band, opening up new textures and enabling a wind musician’s technical facility to have influence on presenting electronic sounds.

Man-Child was an expression of Herbie’s unique and personal concept of orchestration and texture; a primer on how to blend and synergize synthesized and acoustic instruments. The LP was recorded by Fred Catero in such a way as to allow the listener to hear in the most vivid detail the different tonal shadings and details of the widely varied sound of the instruments. Overlooked since its first release, Man-Child charted a different direction in the language of jazz for ensemble writing in the progressive musical environment.” – Bob Belden, 2013 Sony Box Set Liner Notes

– See Man-Child for the studio version of “Hang Up Your Hang Ups”, and V.S.O.P. for another live version.

Maestro Universal Synthesizer System – This analog synthesizer was made for use with the guitar. It serves the instrument as an effects pedal would. It also works with the Maestro Sample and Hold Unit which then can sustain the desired effect until the next sound is triggered. Wah Wah Watson used these instruments on Man-Child.

Voice Bag – The voice bag or talk box is a device that makes a synthesizer talk. The musician sends a note from their instrument into the voice bag. The voice bag then sends that same note through a plastic tube into the musician’s mouth. Using their mouth, throat, and larynx, the musician shapes that sound to make the sound talk. This instrument was used by Wah Wah Watson on Man-Child.