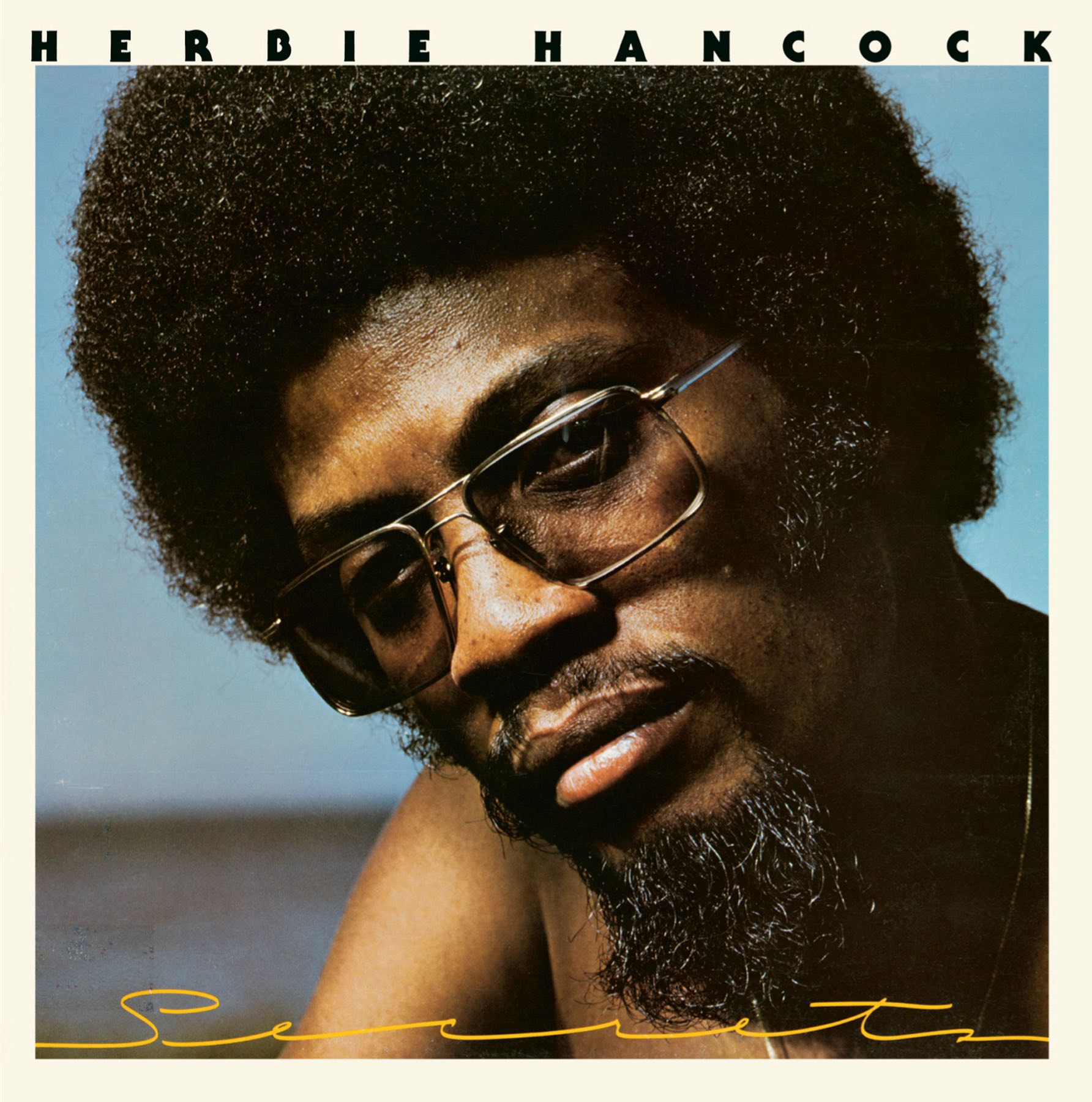 “The successor to Man-Child is both a continuation and a departure: Again, Wah Wah Watson is heavily involved as composer, producer, and guitarist. On the flipside, Secrets marks the end of the classic Head Hunters Band. Only retaining Bennie Maupin on reeds and Paul Jackson on bass, Hancock replaced drummer Mike Clark with James Levi and percussionist Bill Summers with Kenneth Nash. In addition, an old Detroit friend of Wah Wah Watson, Ray Parker Jr. (of Ghostbusters theme fame), contributes his guitar work to the album. Like its forerunners, Secrets strikes a balance between danceable earthy funk (“Doin’ It”), lush downtempo tracks with rich analog synth textures (“People Music”), and fiery fusion explorations (“Sansho Shima”). The album also includes a dramatically altered Afro-Caribbean version of “Cantaloupe Island,” and “Swamp Rat,” a track Paul Jackson co-wrote and recorded again a year later for Roger Glenn’s Reachin’ (1977). Before it was time for the live band (now consisting of Hancock, Watson, Maupin, Jackson, and Levi) to set off for an extended European tour from July to September, Hancock had a Very Special One-time Performance marked in his diary.” – 2013 Sony Box Set Liner Notes

“At the very same time that Herbie was re-discovering his past with V.S.O.P., he was creating a new future – beginning with the recording of Secrets. The core band was similar to the personnel that had recorded Man-Child (Bennie Maupin, Wah Wah Watson, Paul Jackson, but now with James Levi on drums), but the direction that Herbie was going with his music required a break from the past. With the arrival of dance and funk music as the lingua franca of the American and international audience, Herbie transitioned his band from a free-wheeling jazz/funk fusion band to a more tight-knit funk band, yet still in a primarily instrumental setting.

As the band began to settle into a more focused groove, more dance-funk than jazz funk, he worked ever more closely with Wah Wah Watson, and replaced Mike Clark with James Levi. The result of this change was Secrets, which retained some of the original sound of The Head Hunters Band, but foreshadowed the changes coming in the next stage of Herbie’s creative direction.

The impact of Herbie’s recordings with The Head Hunters Band changed the world of jazz by opening up the mindset of both jazz musicians and the listening public to the fact that music could have the power of communicating to a larger set of minds and voices yet retain its musical complexity, quality, and integrity. The band had a string of hits that have become part of the global vocabulary of musicians (“Chameleon,” “Actual Proof,” “Hang Up Your Hang Ups”) and raised the bar for production standards.

This period was also marked by the vastly increased range of expression that the expansion of his keyboard arsenal afforded Herbie by the rapid development of the synthesizer. From simple monophonic keyboards (one note at a time) and sound effects commonly used merely to mimic brass and strings, synthesizers developed into acutely sensitive and expressive sound sources of their own, uniquely electronic but profoundly musical instruments. In Herbie’s hands, they are fully explored to their sonic and musical potential. On these recordings Herbie and his team continued their collaborative production practices that began with Mwandishi, and expanded thereafter. Herbie realized ever more fully that the studio itself is an instrument, and he became increasingly expert at recording techniques, post-production, mixing, and editing. Thus he would compose using the usual components of rhythm and melody and harmony, but with studio techniques part of the musical foundation, not just an afterthought.” – Bob Belden, 2013 Sony Box Set Liner Notes

– A live version of the song “Spider” appears on the album V.S.O.P.

Lyricon – This is an electronic wind instrument resembling the look of a soprano saxophone or an alto clarinet. The instrument has sensors on the mouth piece which are able to recognize lip pressure and wind pressure, as well as buttons to transpose the instrument to a different key and control the octave range. Bennie Maupin plays the Lyricon on the 1976 album Secrets.