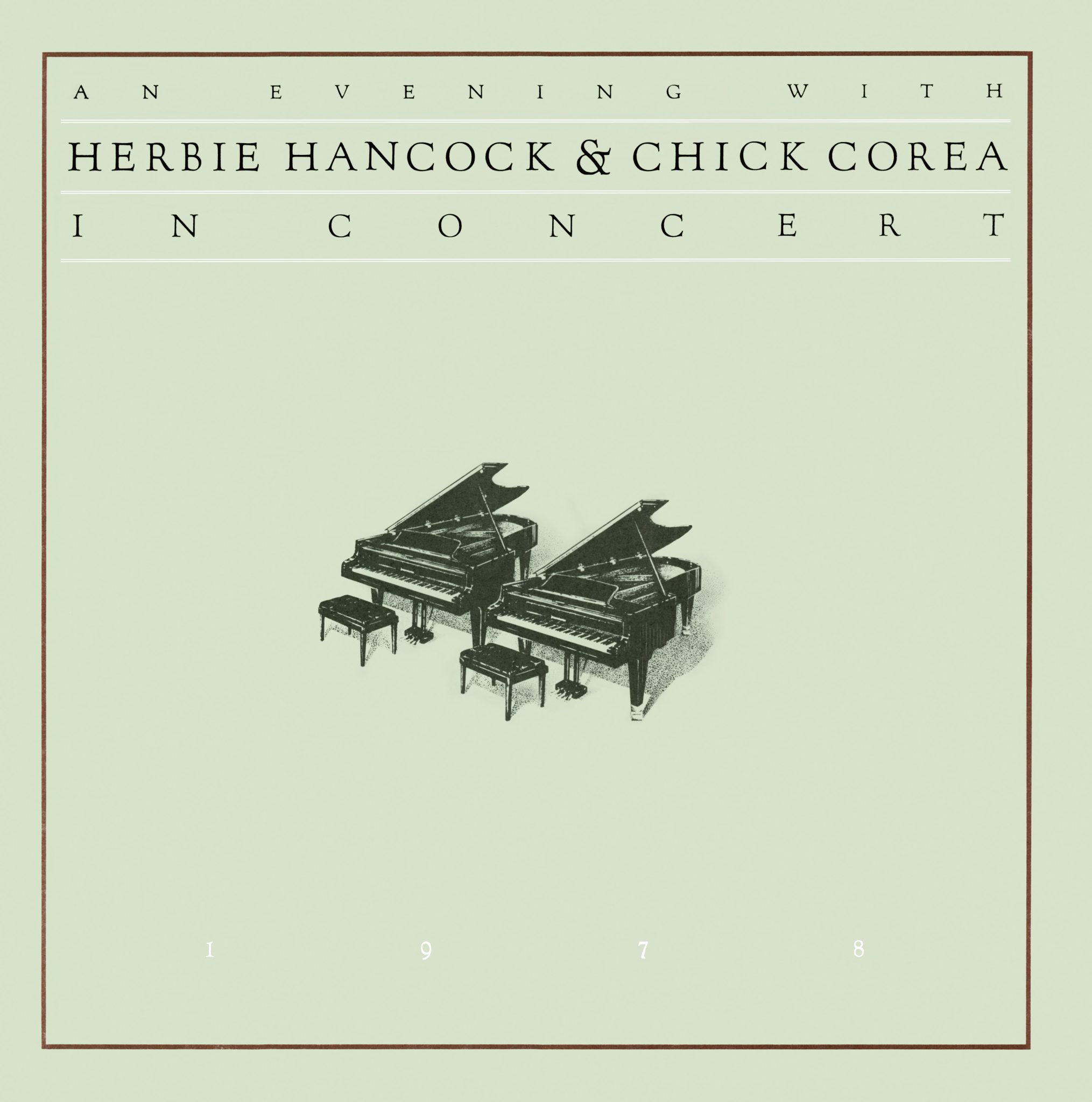 “After winding up the 1977 tour with the V.S.O.P. band, Hancock took an extended break from the road with few exceptions (such as a rare solo piano performance at the Berlin Jazz Festival in Germany). In the meantime, he prepared for a series of duo concerts with fellow pianist Chick Corea, which took place in January and February 1978. A duo tour had been in the planning stages for years, but only now did the two artists and bandleaders find the time to realize the idea (an exception was a brief 1974 encounter on the PBS television program Sound Stage, where the two men played a twin grand piano/multi-keyboard duet on “Someday My Prince Will Come”).

The album testifies to the remarkable musical friendship and empathy, as well as the mastery, of the two piano giants. Clearly savoring the challenge, Hancock and Corea immerse themselves in extended pianistic dialogues, dovetailing and overlaying each other’s melodies and chords (Hancock appears on the left channel, Corea on the right). In a bow to their mentor, Miles Davis, the duo begins with “Someday My Prince Will Come,” before playing Gershwin’s “Liza.”

The album is concluded by stunning segued renditions of “Maiden Voyage” and Corea’s classic composition, “La Fiesta.” Further performances from these concerts were released a year later on Corea’s label, Polydor, and in 1998, Hancock and Corea would meet again for a duet on Hancock’s Verve album, Gershwin’s World.” – 2013 Sony Box Set Liner Notes

In translating these performances to record, our goal was to keep intact both the spirit and integrity of the actual concerts, and the relationship between audience and musician.

These performances have not been technically or electronically enhanced nor is the sound limited or compressed.

In order to achieve as nearly as possible a “direct-to-disc” sense, the selections are presented in the order in which they were performed.

Side Four (of the Original LP) is over 35 minutes long, which resulted in a slightly higher surface noise and overall lower level than could have been achieved had the tape been edited and the side made shorter.

Our decision here was that it was more important to leave the medley of “Maiden Voyage” and “La Fiesta” intact than to be concerned with slight technical deficiencies.

The Seventies are a difficult decade to explain. Watergate, Vietnam, Women’s Rights, Jimmy Carter, Saturday Night Fever, the gas shortage, and fusion. Fusion will always be associated with this decade. Musicians sought to define the term in their own musical language; critics and fans were busy extolling both the virtues of, or condemning the excesses of, fusion. The debate hovered around the tastes of fans who liked ‘acoustic’ or ‘electric jazz; or ‘straight ahead’ or ‘fusion’ jazz; you get the picture.

Beneath the surface of these generalizations about fusion were the individual musicians themselves. A close examination of an artist’s career would often reveal a complex picture of development, so that ‘changes’ in the music of an artist would be seen as a logical extension of thought and experience. Two such artists were Herbie Hancock and Chick Corea.

Herbie Hancock was born in Chicago, Illinois on April 12, 1940, and was a serious student of the piano as a child. After studying engineering at Iowa’s Grinnell College, Herbie settled back into the jazz-rich Chicago scene. During Christmas of 1960, Donald Byrd hired Herbie to replace a homesick Duke Pearson for a gig in Milwaukee, and this put him on his way to New York. By 1963, Miles Davis beckoned, and for six years, Herbie blossomed, so that by 1969, he could try his hand at bandleading. He had solid hits (“Maiden Voyage” and “Watermelon Man”) and had made some of the most definitive jazz music during those years. The Herbie Hancock Sextet lasted one year, and it was soon absorbed into the Mwandishi band (1973). Although Herbie had achieved artistic success with his Mwandishi band, it was not a financial success. The Headhunters were formed in 1973, and their first album yielded a pop hit. “Chameleon” was a huge success and sent Herbie into orbit again.

Chick Corea was born in Chelsea, Massachusetts on June 12, 1941. His father (a trumpet player) instilled his early musical instincts, and soon young Chick was adept at a few instruments (piano and drums). He gigged around Boston until he left for New York in 1962. He fell in With the Latin Jazz scene and recorded With Mongo Santamaria, Montego Joe, and Herbie Mann, among others. In 1964, he teamed up with Blue Mitchell, followed by Stan Getz (1967) and Sarah Vaughan (1968). In August of 1968, he replaced Herbie Hancock in the Miles Davis Quintet. He left Miles in August of 1970 to form the group Circle, and then he put together the first version of Return To Forever in 1971. After a brief return with Stan Getz (1972), he assembled a hardcore electric group, calling it Return To Forever again. With the release of Hymn Of The Seventh Galaxy in 1973, Chick Corea attained the respect and popularity he was striving to reach.

But underneath this electric landscape was an acoustic volcano about to erupt. Keith Jarrett discovered that his solo acoustic piano performances not only sold well, but concerts were well attended. ECM Records began to be noticed, and the heart of ECM Was ‘acoustic music’. Hardcore jazz fans began to plead with musicians to return to a ‘straight ahead’ sound.

Newsweek celebrated ‘Jazz is Back’ in August of 1977, with a cover story featuring Herbie Hancock. This article might have been inspired by Herbie’s ‘return to jazz concert’ at City Center in New York during the Summer of 1977. Herbie Hancock had become so popular that a retrospective of his career was put together, performed before a live audience and recorded by Columbia. The 2-LP Set was V.S.O.P. and the vinyl featured both the Mwandishi group and his current version of the Headhunters. But opening the show was an acoustic quintet made up of Herbie, Wayne Shorter, Ron Carter, Tony Williams and Freddie Hubbard. The concert and recordings were a success, and soon V.S.O.P. was on the road as a concert attraction.

Chick Corea was never that far away from his ‘acoustic’ side during the Seventies. His duets with Gary Burton and his solo recordings on ECM are marvelous statements on the subject of acoustic music. But his great fame came from the group Return To Forever, a band that literally defined the term ‘fusion’ to some people. RTF’s recordings were often invoked (pro and con) in discussions about the contemporary music scene. So it was a welcome surprise to Corea fans in 1976 that Polydor released The Leprechaun, a fully acoustic jazz chamber work. At the same time, Columbia released Return To Forever’s Romantic Warrior LP, a bone-crushing fusion outing. Polydor then released a quasi-follow-up to The Leprechaun with the LP My Spanish Heart in early 1978, then Music Magic in late 78. Clearly, Chick had his acoustic fans.

Herbie Hancock and Chick Corea were jazz stars at the time of this collaboration (February, 1978). Each had taken their own music to new heights, and were highly influential artists. To offer to their fans a duo tour on acoustic piano was evidence to the love and respect that both fans and the artists had for each other, as well as the artistic climate that was changing jazz back towards its acoustic roots.

On a musical level, you could not find two jazz pianists who have such an affinity for one another’s music. Phrases often dovetail from one pianist to another, so that it becomes difficult to tell when one idea begins and where it will end up. Both pianists are known for their exquisite touch, a touch that brings out every nuance and detail of a performance. One can hear the control and discipline that Herbie and Chick have mastered. You can hear the audience react enthusiastically when the duo launches into well-known songs like Herbie’s “Maiden Voyage” and Corea’s “La Fiesta.”

The common ground of Miles Davis is explored on “Someday My Prince Will Come,” and on “Liza,” Chick’s homage to their mutual love of Bill Evans, We hear a sensitivity rare in jazz pianists. “Button Up” and “February Moment” are improvisations, pure, fun and very complex. The release of this LP coincided with a world duo tour that lasted until 1979, when Chick went back on the road with an acoustic version of Return To Forever and in duo With Gary Burton. Herbie soon went on tour with V.S.O.P and then began a series of pop-vocal recordings for Columbia.

From the mid-Seventies forward, Herbie and Chick recorded both acoustic and electric projects in balance, perhaps reflecting this newfound energy coming from acoustic jazz. Both artists blossomed during this time, and in many cases, they went beyond their own and their peers’ expectations. Herbie and Chick took jazz to all corners of the globe, and they achieved this in acoustic or electric settings. Enjoy this performance. It’s only one moment in time, An Evening With Herbie Hancock and Chick Corea. – Bob Belden, March 1998

Mixed by Fred Catero at The Automatt, S.F.

-See The Piano for two other versions of “Someday My Prince Will Come.”