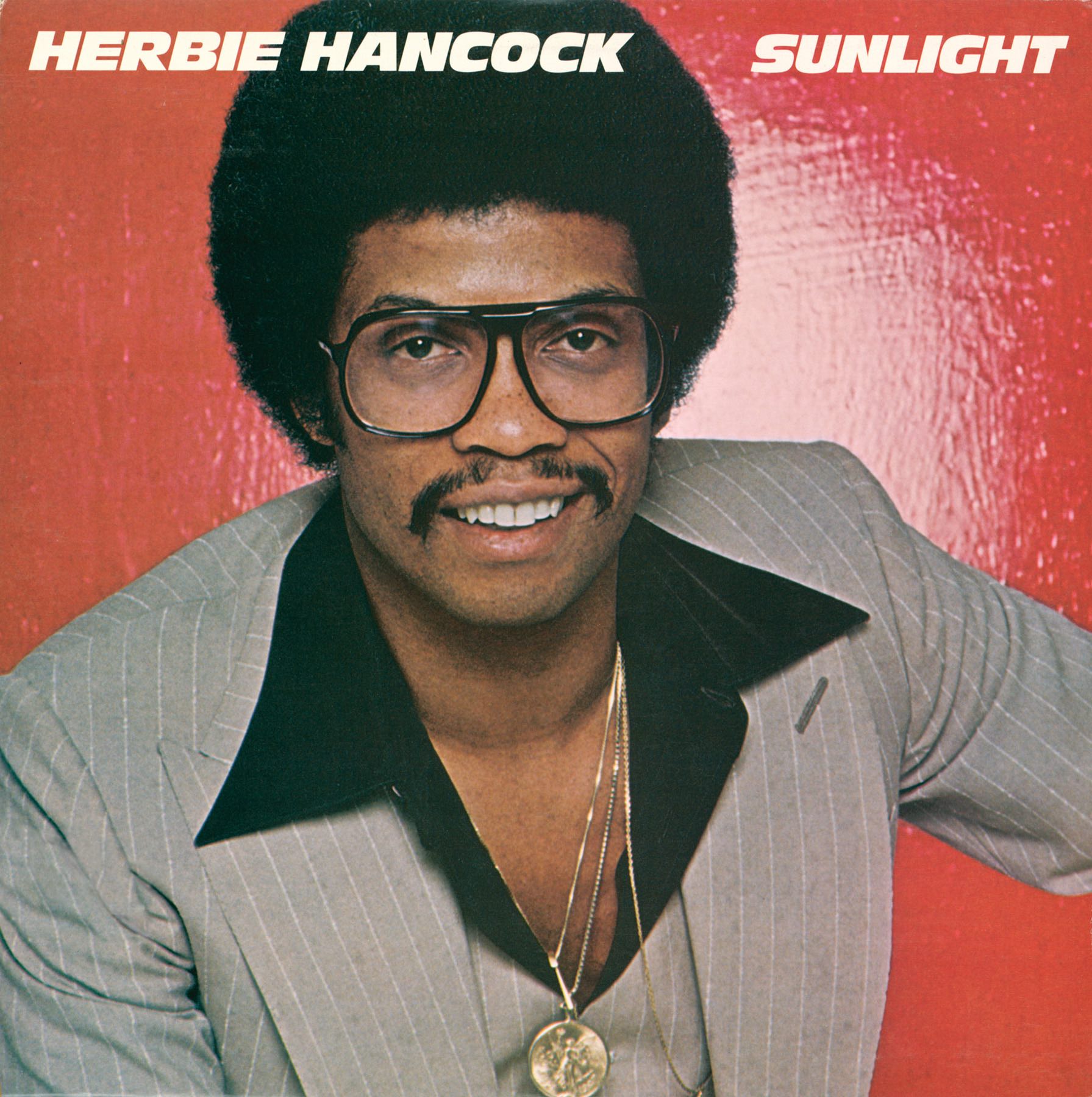 “When Sunlight hit the stores in June 1978, it had been more than two years since Hancock last recorded a funk album under his own name. And whereas his early albums on Columbia had spearheaded the involvement of studio postproduction in the creative process, his albums with the V.S.O.P. band and Chick Corea had all been recorded live.

For Sunlight, Hancock returned to the studio and spent almost a year working on the album between August 1977 and May 1978. Most strikingly, it is Hancock’s first vocal album, facilitated by the use of a vocoder, which combines the individual characteristics of a voice with the pitch and phrasing of a synthesizer.

All tracks are meticulously arranged and seamlessly blend the orchestral instruments with the rich synth textures and colors afforded by a panoply of synthesizers (shown on the back cover). The personnel differs on every track. The disco-infused “I Thought It Was You” features George Duke’s principal rhythm section, bassist Byron Miller and drummer Leon “Ndugu” Chancler, while the ensuing songs were largely recorded with various former Head Hunters cohorts. The final track, “Good Question,” showcases bassist Jaco Pastorius, with whom Hancock had briefly toured in February 1977 when Paul Jackson was not able to make two weeks of gigs.” – 2013 Sony Box Set Liner Notes

“Herbie began to fully realize the vocal possibilities enabled by the advance of synthesizer technology. Herbie’s creative use of the newly invented Sennheiser Vocoder allowed him to sing his songs in his own voice, and even harmonize them according to his own language, expanding his composing opportunities to include popular vocal music concepts. By increasingly developing his skills as a songwriter/collaborator, Herbie was able more fully to access and express the freedom of form that vocal music encouraged.

The method Herbie used for creating Sunlight and the next three “vocal” LPs – Feets Don’t Fail Me Now (1979), Monster (1980), and Magic Windows (1981) – was innovative and productive, and synergized and enabled as usual by further technological advances. Well before MIDI (Musical Instrumental Digital Interface) became a recognized standard for controlling and interfacing various digital devices, Herbie and his brilliant technical collaborator Bryan Bell were devising their own unique and increasingly efficient systems for controlling his growing collection of electronic instruments, and storing the data for recall and re-use. This meant that Herbie could assemble his entire sound array and create, edit and then recall and instantly re-assemble entire rhythm tracks and melodic concepts, essentially by himself. He developed a three-tiered compositional technique, first creating the rhythm track and basic harmonic/tonal structure, then the core melodies, and finally collaborating on the final song structures, melodies, and lyrics to create unique songs. The lyricists included his sister Jean, and the Grammy Award-winning writers Jeffrey Cohen and Allee Willis.” – Bob Belden, 2013 Sony Box Set Liner Notes

Recorded and mixed 1978 by Fred Catero and David Rubinson at The Automatt, S.F.

Strings, brass, and woodwinds recorded at The Village Recorder, L.A.

– See Direct Step and Kimiko Kasai w/ Herbie Hancock: Butterfly for other versions of “I Thought It Was You.”

E-MU Polyphonic Keyboard – A digital polyphonic synthesizer with built-in sequencer and sampling capabilities first developed by E-MU Systems in the early 1970s. This instrument was used by Herbie on his 1978 album Sunlight, among many others.

Polymoog – This fully polyphonic analog synthesizer was released in 1975 and featured eight preset sounds, and had the ability to edit those sounds in a variety of ways. Herbie used this instrument on Sunlight.

Sennheiser Vocoder VSM201 – This synthesizer was designed specifically to be used with the voice via a microphone. It has the look of a standard PA unit with the ability to use controls normally found on a keyboard synthesizer with the human voice to alter the sound. Herbie first used the Vocoder for his vocals on Sunlight.

Yamaha CP-30 – This electronic piano/synthesizer offers a 76-key keyboard and offers over 250 preset sounds to work with. You can hear this instrument being used on Hancock’s 1978 album Sunlight.