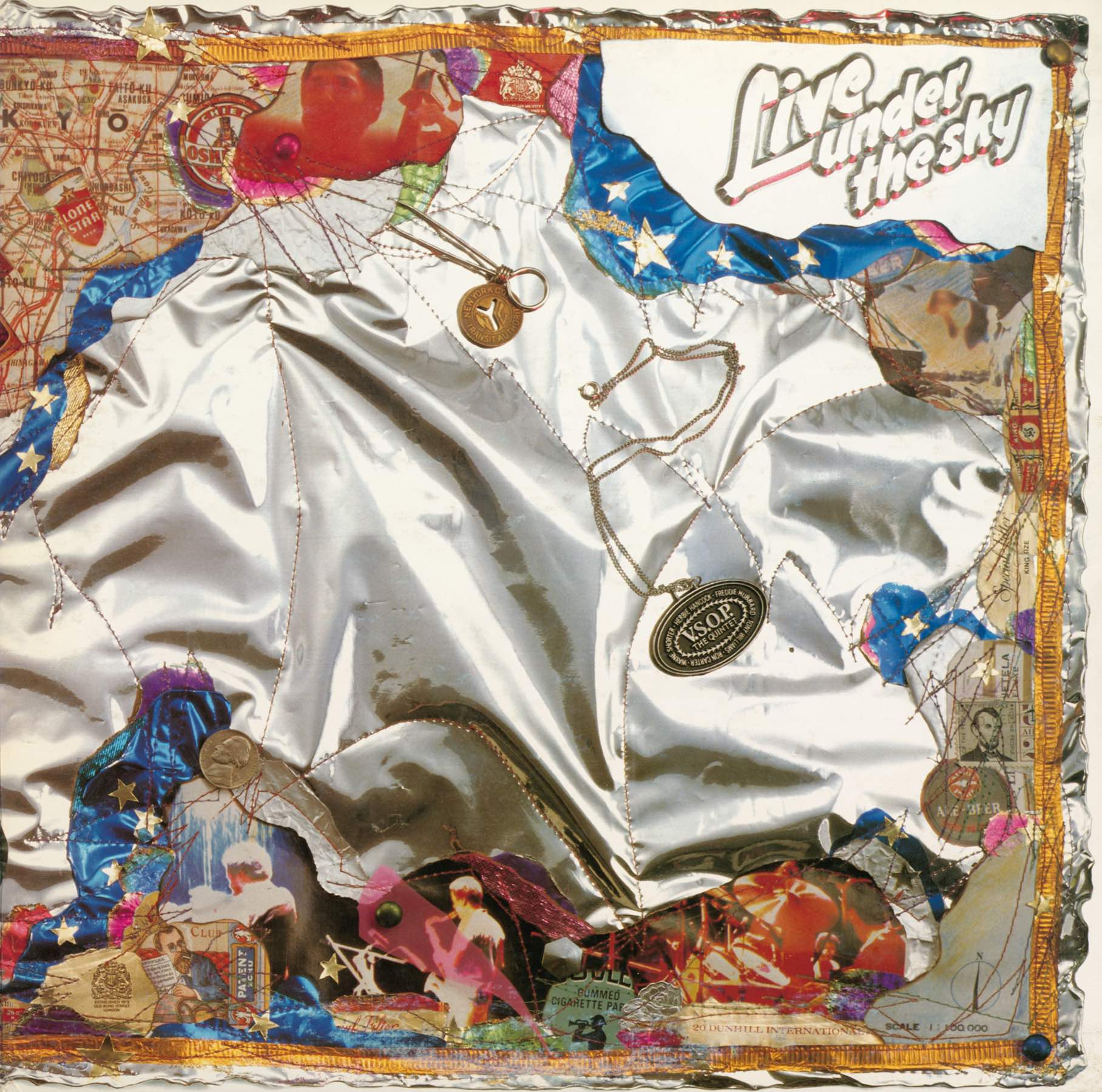 Live Under The Sky

“Following a couple of appearances with Joni Mitchell in May and June of 1979, and another small duo tour with Chick Corea, Hancock and the V.S.O.P. band flew to Japan in late July for two concerts in the Denen Colosseum, where they had recorded Tempest In The Colosseum two years before. The concerts marked a highlight of the annual festival called Live Under The Sky, hence the album name. When the band came onstage the second night, light rainfall threatened to ruin the concert. Regardless, the 30,000 ardent and hungry jazz fans persevered and defied the weather. They were rewarded with a rousing performance in which the musicians kept pushing one another ever harder from the first minute. Freddie Hubbard’s brilliant trumpet attack on “The Eye Of The Hurricane” is countered by Williams’ ferocious drumming. The band shifts directions, moods, and tempos effortlessly, presenting a mixture of delicate ballads (“Tear Drop”) and fiery straight-ahead jazz (“One Of A Kind”). Left completely exhausted by the sheer intensity and energy of the concert, only Hancock and Shorter manage a final encore to conclude the concert with a segued duet performance of “Stella By Starlight” and “On Green Dolphin Street.” – 2013 Sony Box Set Liner Notes

The third Live Under The Sky Concert was held July 25-29, 1979 at the Denen Coliseum, Tokyo; the proceedings were thoroughly drenched by rain. On the 26th in particular, the night that V.S.O.P. appeared, cloudy skies hovered threateningly at site opening time, and the first drops of rain started to fall about 6 o’clock; by the time the concert got underway at 6:30, that had turned into a downpour. The performance started a little behind schedule, but the rain did not let up at all.

Herbie Hancock announced that he would do “Eye Of The Hurricane” as the first selection. It’s the piece that V.S.O.P. always plays to open a set. It has already been recorded, so it’s not included in this album. But what do you know? The rain stopped during the performance of this piece – truly the passing of the hurricane’s eye.

The rain started up again as the piece ended and it fell continuously. I live just a few minutes away from the Denen Coliseum, but it’s the first time I’ve seen such heavy rain. Hancock even said from the vinyl roof-covered stage, “It’s just like a swimming pool,” so you can imagine what it was like for the fans out in the uncovered seats. Pools of water formed between the seats, and the water flowed like a river. And since the rain started falling after the site opened, there were a lot of people without rain gear, and they got soaked to the skin. Some people opened up umbrellas, but shouts of “close that umbrella!” from behind forced them to close them up again. I was wearing a foldable plastic raincoat like those sold in discount shops, but raindrops got in somehow and I was all wet too. The rain didn’t let up until the last encore.

By the way, I found out later that the rainfall had been concentrated only in this area. Fellow passengers looked askance at the rain-soaked fans boarding trains after the concert. The fans exclaimed “Oh, it’s cold” as they shivered in the air-conditioned cars. Notwithstanding the terrible conditions, the playing on stage was superb. It’s correct to say that the five musicians, moved by the sight of over 10,000 fans listening earnestly and making no move to protect themselves from the downpour, gave their best in response to this.

The order of the pieces on the record was changed a bit, so, for the books, the pieces were played on the night of the concert as follows:

There was no place onsite that escaped being wet by the spray. I’m sure the lighting, the PA, the mikes, and the recording equipment got soaked. There are spots on the recording where you can hear the sound of the heavy rain between selections. I assure you that it’s not static.

“One Of Another Kind” is a sister song to “One Of A Kind” which graced the opening of a previous V.S.O.P. album, Live in USA. It’s a Freddie Hubbard original. As I mentioned previously, it was the last song played at the concert.

The theme was set out by piano and bass, then in an ensemble riff, followed by trumpet, soprano sax, and piano solos. Everyone and his instrument was thoroughly wet, and Wayne Shorter, in particular, had trouble with the pad on his soprano sax, but it was hardly noticeable. That’s a pro for you! Following was a drum solo by Tony Williams, backed by piano and bass, which led back to the riff. The piece would ordinarily be acclaimed by a storm of applause, but in the rain, the cheering was louder than the clapping.

“Teardrop” is a Ron Carter composition. It was performed as the rain started falling heavily once more, with Wayne Shorter on tenor sax. This is a slow piece, with Ron Carter’s bass as the centerpiece, but the rain certainly didn’t slow down. It was moving, however, to see the fans listening intently as they sat exposed to the deluge.

“Pee Wee,” by Tony Williams, appeared in 1967 on the Miles Davis album Sorcerer performed without Miles. The musicans who performed it then Were Shorter, Hancock, Carter and Williams, the same lineup as in V.S.O.P. Here it is performed without Freddie Hubbard. On this B-side, it’s the second of two slow numbers, but as stated previously, it was actually played following “Domo” and “Para Oriente.” Wayne Shorter is on tenor sax. As his performance ends, Herbie’s “Hey, Wayne! Beautiful, beautiful, Wayne Shorter!” is captured.

There was an interruption of about 6 minutes before proceeding With “Para Oriente”, (record, 2, Side A), to clean up the stage. Meanwhile, Herbie was saying “This is just like a swimming pool here,” and leadng the audience in handclaps before returning to his place. The rain was falling thick and fast.

Herbie then introduced Tony Williams’ “Para Oriente” and started playing. This selection was really superb, though was not listening to it that intently. As I wrote later in my review of the concert for the Yomiuri Shimbun, “It’s not easy to listen while being drenched; thinking about it afterwards, it felt as if I was listening to the music in a dream.” But the interesting thing about this piece is how the trumpet and the tenor sax intertwine different melodic lines for the climax and the way they lead up to this climax; the piece’s construction gives it an intriguing flavor.

Listening once more, this time with a clean head and in a comfortable listening room, I am still convinced that this one piece is the greatest achievement in this year’s entire V.S.O.P. program. By the way, the sounds of the falling rain are captured very clearly during this performance, which makes it all the more valuable as a souvenir of that particular night.

The two brasses and the theme in unison give way to a piano trio. This is not your usual a piano backed with a rhythm section; it’s an interlocking of piano, bass and drums. Trumpet and tenor sax take up the theme again, followed this time by the five players coming together in a really interesting way. First, the tenor sax seems to be leading, and then it feels as though the trumpet is answering, so that parallel melodies come together with equal prominence. With the volume turned up a bit, you can near the sound of the beating rain clearly.

Herbie complimented the audience frequently saying, “This is the greatest audience ever!” This was not mere flattery or condescension on his part – he was truly moved. “Let’s go for a swim once this is over! We can swim between the building and the parking lot,” he said, or “If we had some soap, this would be just right for a shower.” These comments of his make a great souvenir too.

The official program ended with a reprise of “One Of Another Kind”, played following “Pee Wee”. The next piece, “Fragile”, was prepared as an encore. The two brasses’ intertwined playing is interesting here too, but Wayne Shorter fans will notice that his playing did not flow and was very stiff. In fact, the cork pad of his instrument had swelled, and rainwater had accumulated in the keys, making it impossible to play properly. But even so, the fact that he could still play as he did goes to show how thoroughly professional he is.

Herbie Hancock’s “Domo” is on the B-side of record 2. “Domo,” of course, is the Japanese “domo” (translator’s note: “domo” has no literal translation in English, but it can be used to mean “thank you,” or as a greeting). This piece was the third selection of the evening, played after “Teardrop”, as I mentioned before. It is evidently the work of the group’s leader, tailored to draw out the group’s strong points. Featured are long solos by Shorter on tenor sax, Hubbard and Hancock. This is what was played in response to the crowd’s chanted “Encore! Encore!” after “Fragile”. The rain had finally stopped. The chanting did not show any sign of letting up. All the instruments were completely soaked. Then Herbie appeared on stage, ready to do a piano solo. Wayne Shorter followed him, holding his tenor sax. The two did a duet, playing “Stella By Starlight / On Green Dolphin Street”. The fans broke out laughing soon after Shorter took up his sax, because as he played, his eyes locked on Hancock’s. All the rain-soaked listeners were very moved by this duet, which became the main topic of conversation on the trains later and at the following day’s performance.

As for other masterpieces of performance heard in a pouring rain, I can recall Chick Corea’s piano solo in July 1972 at the Nemu-no-Sato Nemu/Jazz-In, Mie Prefecture. Chick had come to Japan all by himself for this event. It was cloudy and raining. Fumio Watanabe (drums), appearing With Yosuke Yamashita (piano) and Free Jazz Orchestra in the slot just before Chick’s, did a rain dance and rain started falling, as if by command. Chick performed a solo to remember in that rain.

It may well be that pouring rain gives birth to unforgettable performances. – Shoichi Yui

Produced and Mixed by David Rubinson

See Quartet for another version of the song “Pee Wee.”