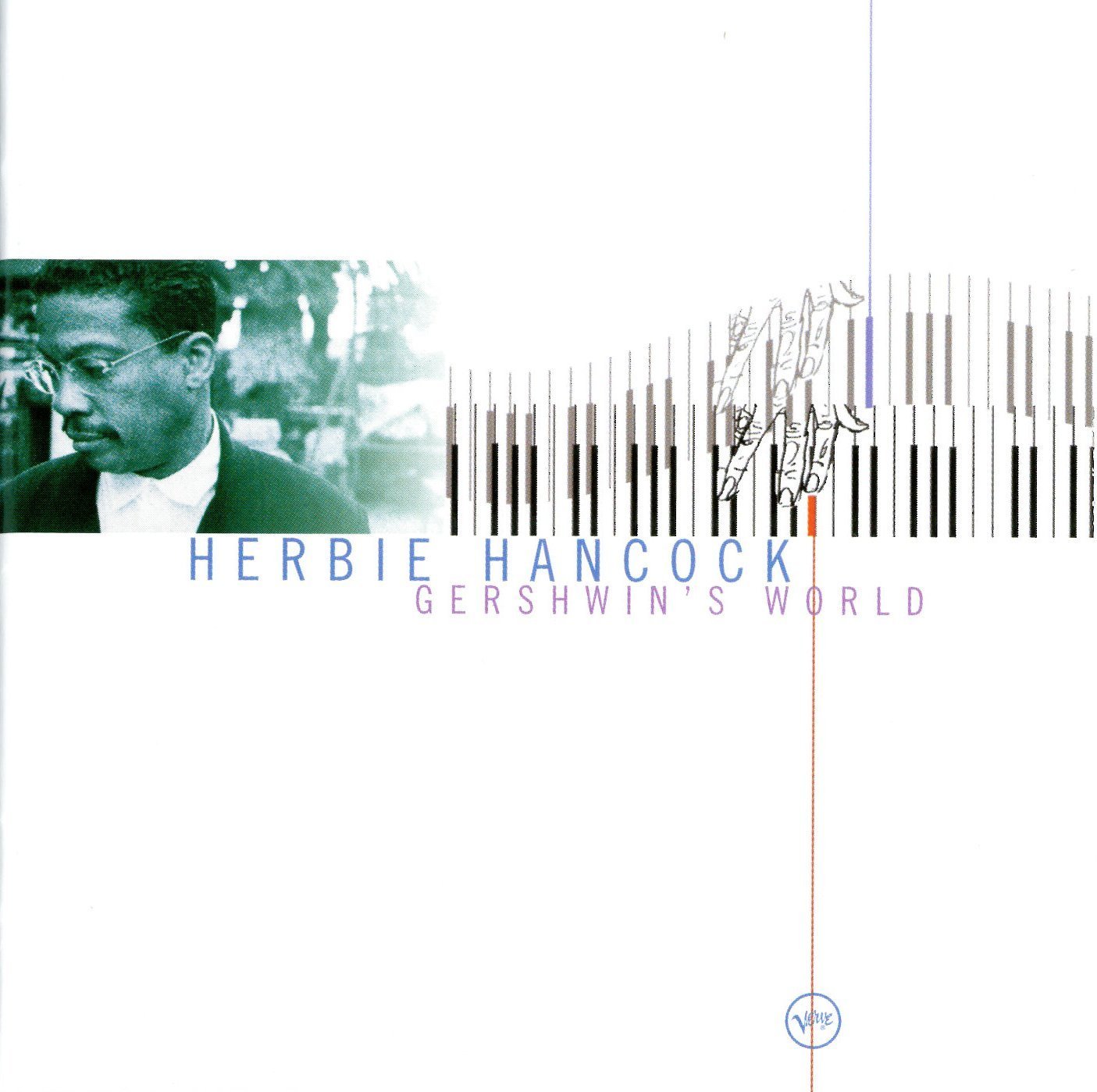 “Gershwin’s World is a tour de force for Herbie Hancock, transcending genre and label, and ranking among the finest recordings of his lengthy career. Released to coincide with the 100th anniversary of George Gershwin’s birth, this disc features jazzman Hancock with a classy collection of special guests.

The most surprising of Hancock’s guest stars is Joni Mitchell, who delivers a gorgeously sensual vocal on “The Man I Love,” then provides an airy, worldly take on “Summertime.” On these two tracks, she shows she has come a long way from her folksinger beginnings to become a first-class jazz singer in her own right.

Stevie Wonder’s unmistakable harmonica complements Mitchell’s singing on “Summertime” and shares lead instrument space with his own voice on the W.C. Handy classic “St. Louis Blues.” Jazzman extraordinaire Wayne Shorter smokes a solo spot on Duke Ellington’s “Cotton Tail” and carves out some space for his soprano saxophone in the midst of “Summertime.”

A number of the young lions of jazz are featured on various cuts, and Herbie’s old pal Chick Corea joins the leader for a piano duet of James P. Johnson’s “Blueberry Rhyme.” Gershwin’s wonderful, extended “Lullaby” finds Hancock teamed with the Orpheus Chamber Orchestra, as does an attractive arrangement of a “Concerto for Piano and Orchestra” by Maurice Ravel, whose jazz influence can be heard on the piece.

In addition, one of the most beautiful tracks on the album places star soprano Kathleen Battle’s voice at the forefront of Gershwin’s own “Prelude in C# Minor.” Yet with all the fine performances by his guests, Gershwin’s World remains Hancock’s show, and he plays magnificently throughout. From beautiful to funky, percussive to melodic, improvisational to tightly arranged, Hancock and cohorts take a wondrous journey through the music and world of Gershwin.” – Allmusic

Herbie Hancock and I discussed this project for more than a year before we started recording. We both felt that to celebrate Gershwin on the occasion of his centennial, we wanted to honor his largeness of spirit, the musical and personal generosity which was characteristic of the man. Also, in searching to penetrate the spirit of his music, we wanted to create an album which had elements of jazz, classical music, African music, and some flavors which we couldn’t necessarily categorize at all.

These four giants each stand in a special relation to George Gershwin. Gershwin’s style is deeply rooted in the melodic blues idiom of Handy, and his great piano playing and writing are an extension of the style of James P. and his colleagues. Johnson played at the party after Rhapsody in Blue – shortly afterward, he composed his own great work for piano and orchestra, Yamekraw.

When Ravel came to New York, he told his friends that he wanted to meet Gershwin, hear him play, and see one of his shows. He did all of that, and the first evening they spent together, Gershwin played piano for hours. Ravel was enchanted. Three years later, he wrote his last major work, the Piano Concerto in G – echoes of jazz float through this great composition. Gershwin had boundless admiration for Ravel, and even asked him for lessons – Ravel declined, saying that he would hate to risk stultifying Gershwin’s melodic gift.

Ellington’s relationship to Gershwin is a little different. Born a year apart, the two men were kindred spirits in their search to expand the scope and language of American music. His “Cotton Tail” is based on the chords of Gershwin’s “I Got Rhythm”. Ellington was not alone in his affection for the chord changes of “I Got Rhythm” – they have been used as the basis for compositions by countless jazz greats, including Charlie Parker’s “Anthropology”, Thelonious Monk’s “Rhythm-a-Ning”, and Sonny Rollins’s “Oleo”. In his solo on “Cotton Tail” on this album, Herbie throws in a quick reference to the original melody.

We wanted to bring out the melodic beauty and rhythmic vitality of Gershwin, but even more, we wanted our work to reflect his searching, adventurous spirit. Our great colleagues on this album were of similar mind: Wayne Shorter finding a different way to play “Cotton Tail”, Joni Mitchell showing a side that very few people know, the four West African percussionists and Cyro Baptista bringing the accents of Senegal and Bahia to create a truly fascinating rhythm. A song like “It Ain’t Necessarily So” transformed itself so much during the recording session that we included two different versions on the album. (There was another in multiple time signatures, but that will have to wait for another CD.)

After Joni and Stevie collaborated on “Summertime”, Stevie stayed to do “St. Louis Blues”. He left the studio at 8:00 AM after working with us all night. Years ago, while on tour, Coleman Hawkins stayed up till morning jamming with the great tenor players of Kansas City and burned out the transmission in his new Cadillac pushing to make his next concert. Watching Stevie leave to catch a plane to Italy, I felt the warmth of that musical fire which cannot be bought or sold, but only freely given.

It was a joy working with Herbie on this album. – Robert Sadin

A Note From Herbie Hancock:

“On this record we worked very hard to personalize the Gershwin material while staying true to the spirit of jazz. Anyone can play the straight Gershwin tunes. Our intentions were to reach inside to the core of each piece in search of the composer’s original impulses, and to take those elements and recompose and reconstruct them in our own way.

This is arguably the most challenging project I’ve ever done. In recent years I’m more interested in working toward making events, not just records. This is the first example of the kind of record I’m interested in releasing at this point in my life. I wanted a structure that would encourage me to reach deep inside my sincerity, my heart, and my life for solutions. We never took anything for granted, never accepted any conventions. For example, we didn’t use drums on many tracks, but used percussion a great deal. I was also interested in rekindling my participation with classical music.

As it turned out, nearly every track is totally different and yet there’s a thread that binds them all together – that thread is jazz and George Gershwin.” – Herbie Hancock